In 2014, I completed a year-long 1-second-a-day project. My kids still ask to watch the seven minute result, enjoying the flashes of the everyday and odd sound-grabs. I was reminded of it when I read Dominic Smith’s latest novel, The Electric Hotel.

The novel focuses on Claude Ballard, a pioneer of silent films.

Strangers have always interested me, Claude said. The way they illuminate their own sorrows or joys when you least expect it. It might be half a second of staring into space, then it vanishes.

The story moves between Fort Lee, New Jersey (America’s first movie town), the battlefields of Belgium during World War I, Paris, and later, Hollywood. When a film-history student comes to interview Claude about his lost masterpiece, The Electric Hotel, Claude is reminded of his muse, the difficult but enchanting actress, Sabine Montrose, and the others that shaped his career, from investors to stuntmen.

There’s a denseness to Smith’s writing that I don’t quite get on with. I appreciate the richness of the detail; Smith’s meticulous research; and what is clearly a passion for what he is writing about – for example, the section devoted to Claude’s role in building the ‘fake Paris’ was fascinating. Equally interesting, the mention of Tuberculosis (it is critical to a number of subplots). A doctor describes those suffering, and I can only assume that Smith found these words in an old medical manual somewhere (clearly the Tuberculars are complex people) –

Tuberculars are hedonistic, stylish, and emotionally superficial…they crave freedom…they move through the world sensing they might suffocate, that the air is too heavy to breathe. A chill between the shoulder blades and an aversion to meat. They crave cold milk, want to use foul language, and are afraid of dogs.

There was some lovely detail around the process of movie-making and although the character of Sabine was flimsy, she had some terrific scenes –

Every role began with a wound and a spark, something to fuse the character to the actor’s own shards of memory.

However, the characters lacked heart and their motivations weren’t always convincing, particularly in the case of Sabine. Furthermore, Smith’s writing frequently felt heavy and overworked, and as a result the themes around our perception of the world and what we chose to ‘focus’ on, aren’t as crisp as they could be.

Now they were all aficionados of the human drama, the grocery clerk and the banker’s wife and the businessman, laying everything out on a mental wire of juxtaposition and suggestion. It was the viewer, Claude knew, who provided his own narrative powers to complete the picture, who placed one thing against another.

I read this book because I enjoyed The Last Painting of Sara de Vos and I think historical fiction fans will adore it. I will read more from Smith in the future, if only for the educative value

I received my copy of The Electric Hotel from the publisher, Farrar, Straus and Giroux, via NetGalley, in exchange for an honest review.

On May 18, 1910, the night New York would ‘…swim into the gassy tail of Halley’s Comet…’, Sabine drank an absinthe frappe. 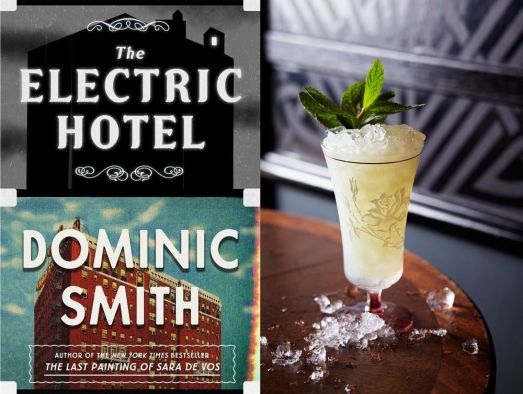