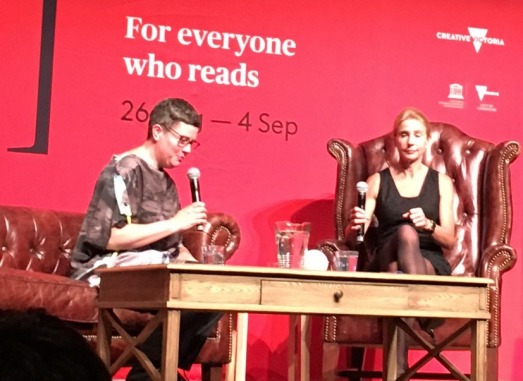 I’m almost reluctant to write about Lionel Shriver’s closing address on Sunday night at the Melbourne Writers Festival. Reluctant because her speech was dense with insight, sound-bites, and stuff to make you really think hard, and I’d hate to misquote or misrepresent her in any way.

If you haven’t had the opportunity to hear Shriver speak, do next time she visits your neck of the woods. She is, without question, one of the most compelling and powerful authors – no, people – that I’ve ever heard speak.

Shriver’s closing address was on the topic of gender, and its importance within the concept of personal and social identity. Much of what she spoke about was originally published in an article, Gender – Good for Nothing, earlier this year. However, as is the case whenever I hear a presentation, there were a few messages that stood out.

Shriver opened with talking about the process of developing characters, noting that one of the of the very first decisions an author makes about a character is their gender. She went on to say that she would like to think that her characters would be the same, even if the character’s gender was switched. Using the examples of Willy in Double Fault, (an ambitious, detached female), and Shep, in So Much For That (an empathetic, emotional man), Shriver noted, “The experience of ‘being’ is the same. The crucial elements of a character are gender less.”

“We’re all made of what we can change and what we’re stuck with.” The stuff that we can change is fodder for fiction writers although in reality, Shriver said she sees very little transformation in people – “Metamorphism is fantastical.”

Discussion about characters provided a segue into the guts of her thesis – that the ‘self’, the inner being, is in fact genderless.

“So I am far more interested in heading in the direction of who-cares-what-gender-you-are than in painfully parsing which kind. This issue is inextricable from the nature of self. In general, identity comprises a set of external facts and the subjective experience of being. Confusingly, self is both something we are born as and something we make.”

Shriver is fascinated by the concept of “feeling” like a woman – she doesn’t, she just feels like herself and was clear about the fact that being either a woman or a man didn’t matter that much to her, “I’m not being insincere or glib when I say I don’t understand what it is to ‘feel’ like a woman. My gender is not central to my identity.”

To emphasise her point, Shriver challenged the audience to ask any person who was disfigured, or obese, or anorexic, or without a limb, if their body and their ‘self’ were one of the same? “Gender has grown destructively hyper-significant.”

In closing, Shriver returned to writing characters – “Interior being, in the hands of a good fiction writer, can triumph over body. The elements of character – bravery, empathy, resourcefulness, compassion – can visit anyone, regardless of gender.”