I was prepared to be devastated by Eliza Henry-Jones’s debut novel, In the Quiet. After all, it’s about a mother, who’s dead, observing her husband and three children from afar as they try to get on with life without her. Basically, ALL MY TRIGGERS.

But then, apart from a little wobbly moment at the very beginning (the dead mother, Cate, was watching her children sleep… I know, right?), I was strangely resistant to this story. And I can’t really put my finger on why.

“…Rafferty has curled up in a ball, his head underneath his pillow, his arms curled around his stomach. He says it so quietly, I barely catch it. ‘Mum,’ Rafferty whispers, his eyes pressed shut.”

In the Quiet is well written. The language is simple (had it been too sentimental, this book would have strayed in to the hen-lit zone and out of my reading stack). Henry-Jones does an excellent job of creating a sense of place and, although I was never a ‘horsey-girl’, gives a charming account of lives filled with horse-love.

“The tracks smell of the bitter twist of eucalypt, of stones, and sun, and air rushed through leaves.”

I think that’s a superb sentence.

Henry-Jones also does a good job of exploring the different ways in which people grieve, and you get glimpses of what is a very personal process through various events that effect Cate’s family.

“Grief, I suppose, is something you think you understand once you have seen its colours, its shapes. But the thing about grief is that it is forever changing. A swell, subsiding.”

And yet, some of the plot twists just didn’t sit well with me. And I found the voice of Cate detached. That may have been the author’s intention, but the detachment meant that I wasn’t engaged in the way I had anticipated. I wanted raw emotion. I wanted scenes that made me sob.

It may have broken Cate in two but it didn’t quite deliver for me.

3/5 A promising debut but I’ll want more next time.

I received my copy of In the Quiet from the publisher, Harper Collins Australia, via NetGalley, in exchange for an honest review.

“I have memories that I am sure are from the last few weeks of my life. Dipping Turkish bread into an avocado salsa that Cameron has made…”

I love this recipe for guacamole with grains from chef Paul Wilson- it sounds a bit odd and guac-purists will have a fit but I promise you, it’s spectacular. 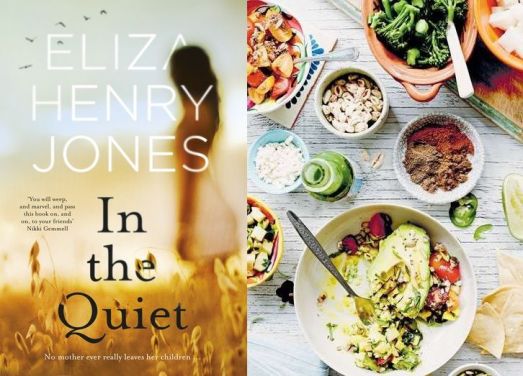